HellOooo all. I hope you are all well. Isn’t that the most beautiful sunset ever? This photo was taken by a fellow Sunshine Coaster – just stunning.

Things are wonderful here on the Sunshine Coast although it’s been pretty busy these past few weeks with what seems like all work and no play. But the days are getting lighter and sunnier and so this weekend I’m going to “dust” off our deck and clean everything up in preparation for after work drinks, barbecue suppers and after dinner tea. 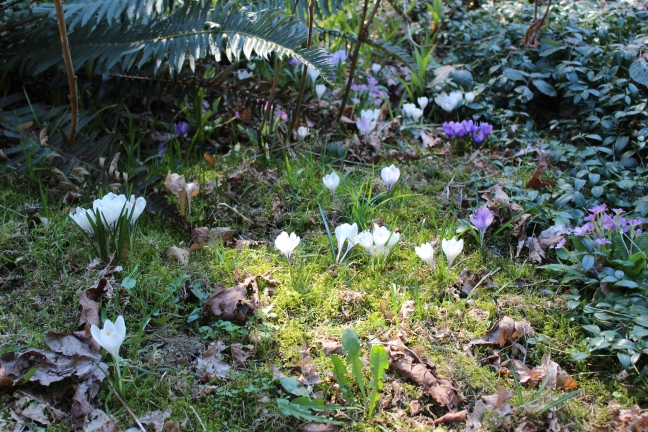 And the daffodils and tulips are growing bigger by the day

To continue with “operation clean up” from the Fall, we bought some lovely pots for our front porch along with some little bunnies that I found, oddly enough, in the drug store

Being with good friends is always an amazing experience. After celebrating a life at last month’s funeral, that night we celebrated a birthday 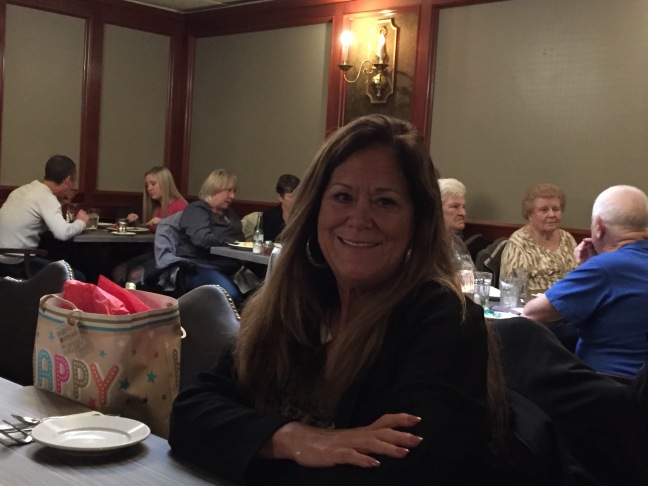 The following weekend was warm and sunny. Tori was still in Vancouver completing his course, so I decided to take a drive out to Ruby Lake. Ruby Lake is named because the water turns red at sunset. 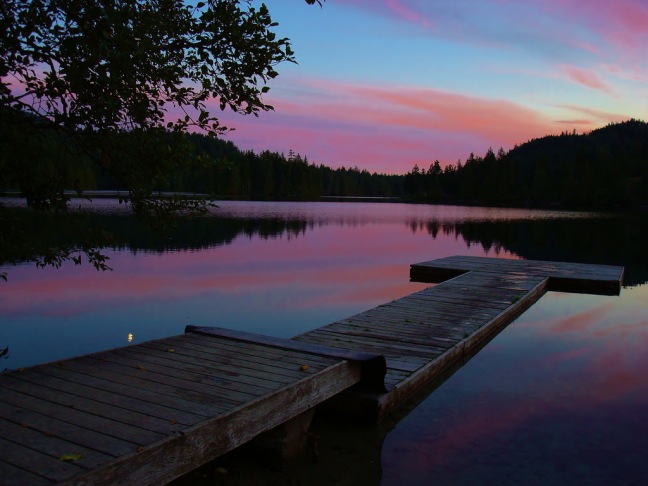 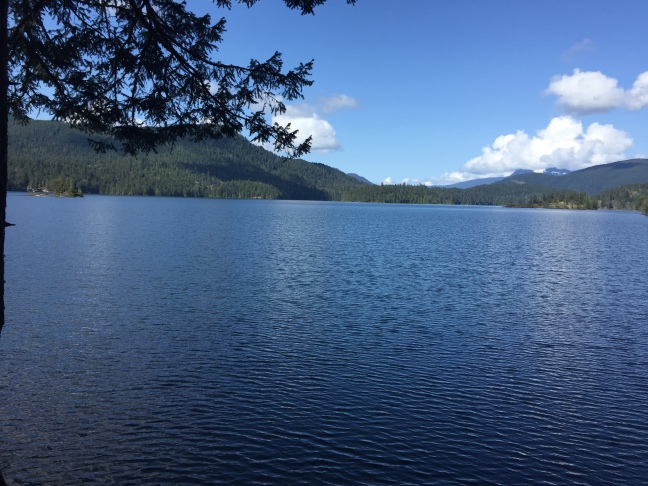 hiking trails and a beach. 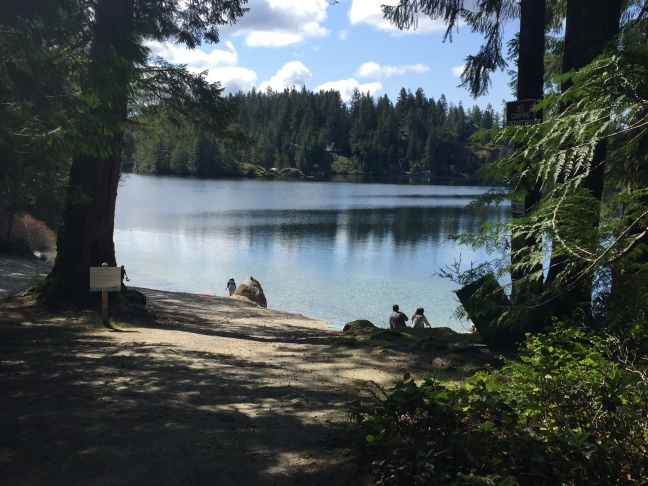 This is definitely somewhere we’ll come back to over the course of the summer.

The following weekend we took the opportunity of having Neil for the weekend. His parents have decided  to move back to Edmonton, which broke our hearts. The sunny weather turned cloudy and cold, but that didn’t stop us from visiting the beach and eating ice cream

Spring has come in with a vengeance at Halfmoon Bay – the daffodils and tulips that I stuffed into a window box last September when we moved, started to bloom

So beautiful – I just adore Daffodils. Of course, they were too crowded, so not all of them bloomed. When they’re done, I’ll separate them out. 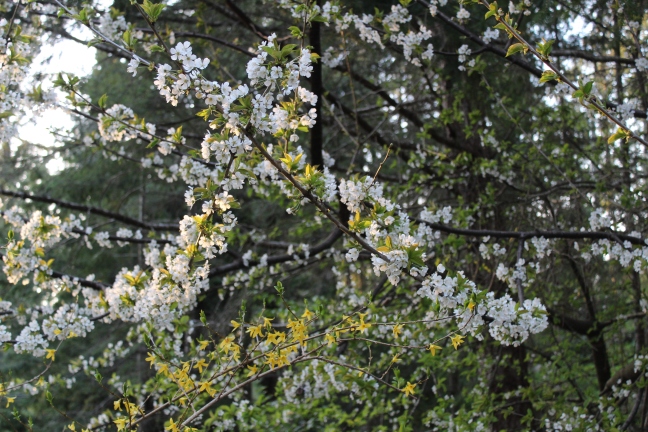 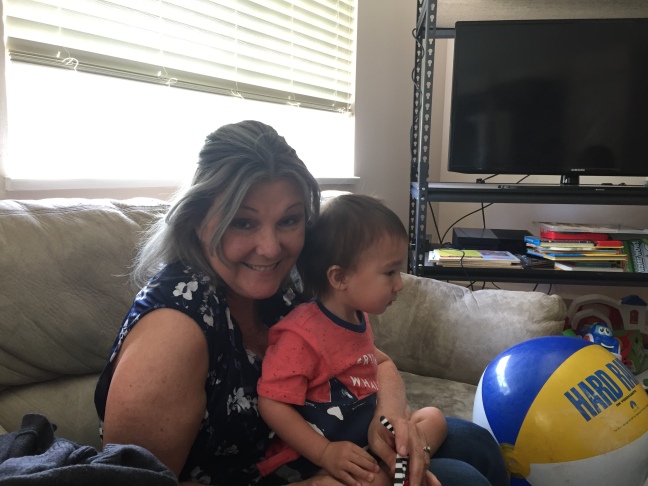 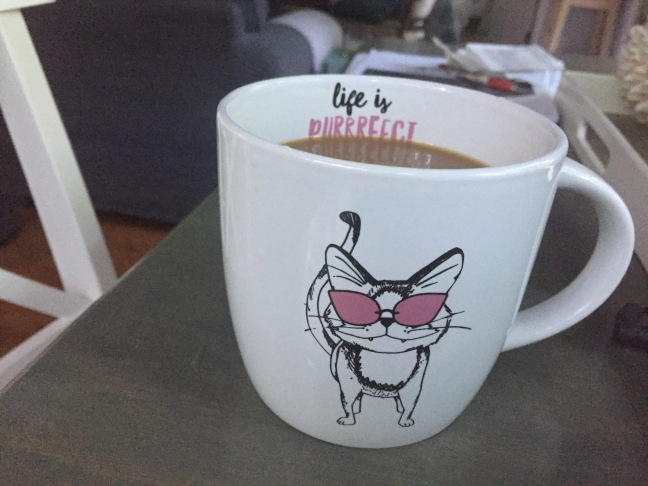 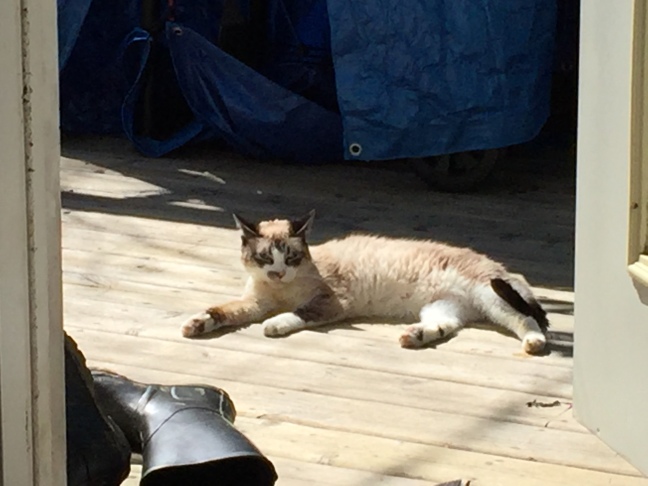 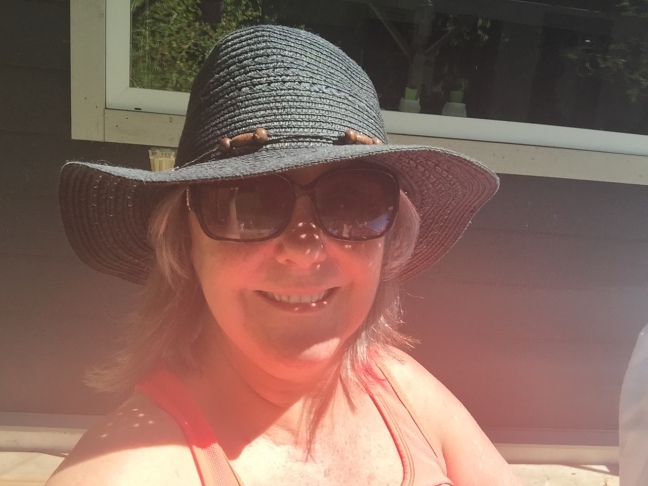 All too soon it was Monday and back to work. I guess Willow felt it too

Helloooo! I hope everyone is well. After our brief week of sunshine, it was back to rain again. My plants are not happy at all. Buuut, things are looking up for this week, so hopefully they’ll dry out and perk up. We had planned to buy three little fir trees to put against our back fence, but Alex had some palm trees languishing in the warehouse where he works that the customer didn’t want, so we took three. When he told me that there were quite a few more that hadn’t seen water or sunshine for a few weeks, I felt so sorry for them, we took those as well! About eight in total! LOL. At this point, the patio was starting to look more like a jungle!

But, we gave them some love and they soon perked up. We kept the original three and gave the rest away to good homes. 🙂

It really fills up that area and lends a tropical feel to the space. I can pretend I’m languishing on a Caribbean beach sipping something with an umbrella in it!

The fairy garden that I started in the front bed didn’t really look as good as I had imaged it, no matter what I did. It seems that nothing likes to grow in that area, which is why I thought that a fairy village would be perfect for that space, but, alas, it was not to be!

Even when I bought some little glass stones to look like a river, some fake moss and little white stones to make pathways (or roads), it just didn’t look right and the plants started dying 🙁

Sooo, I moved a couple of items to the back garden. There’s a bed there that looks more … woodland fairy-like

And I’ll add to it as time goes on.

As for the fairy village in the front. I’ll be re-working it – just need to get some inspiration!!

It looked like it was going to be a nice day last Tuesday and so we gathered our picnic supplies and headed off to the beach. But it was also the day a local school picked for their yearly outing because the beach was crawling with children – everywhere! It wouldn’t have been so bad if they all didn’t insist on screaming continuously over absolutely nothing at all.  So we let Neil paddle about for a bit because he seemed to be enjoying himself, but after about an hour, I couldn’t stand the screaming any longer and we decided to go for ice cream instead.

The weather warmed up just enough on Saturday for us to go on a bike ride with good friends, and then a barbecue and a few drinks afterwards.

Hello everyone. Time is flying by so quicky, I can’t believe we’re already halfway through the year!

Had a bit of a quiet week the week before last. We had Neil on the Wednesday and planned on a picnic at Garry Point in Steveston, but it was so windy we got straight back in the car and drove home again :(. In the picture below, the guy flying the kite is actually on wheels and was being ‘towed’ around by the wind.

So, we just hung around at home. It wasn’t so windy in our area.

The next day, Tori gave Chewy a hair cut 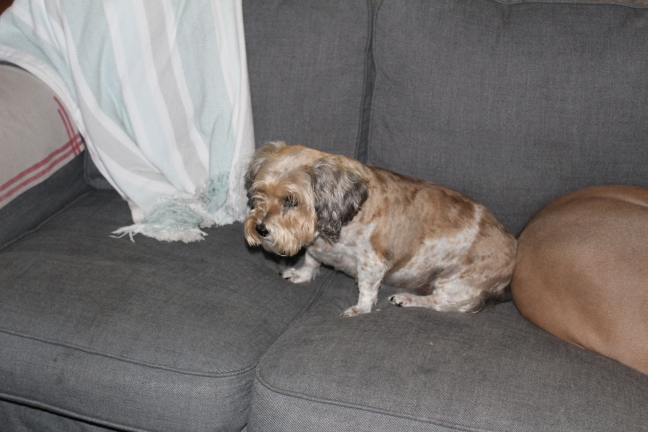 As you can see, she’s not very impressed! 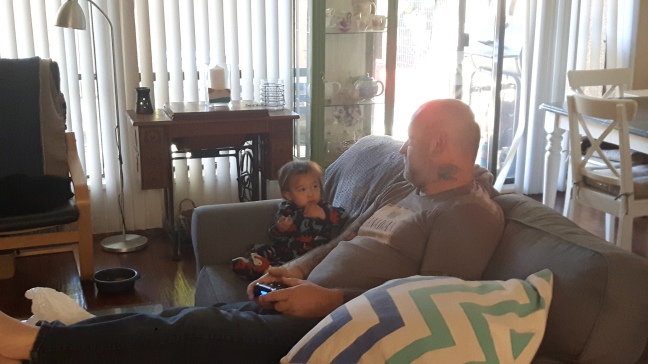 Not sure what’s going on there, but it looks like a serious conversation! :). Maybe they’re planning their gaming strategy.

And then we got some sad news on Tuesday. Tori’s Dad passed away. Only 3 months after his Mom. We’ll be travelling up to Northern Alberta in August for a memorial with the family.

and then played at the park for a little bit

On the weekend I started two new series on my blog, The Jane Effect. The first one is on the top 12 beaches in BC (I love beaches). You can read about the first two here. There really are some beautiful beaches in BC that rival anything you’ll find in Mexico or the like. The second is a more permanent fixture – wine pairing. You can read the first in the series here. I know absolutely nothing about wine pairing, but would love to learn. Follow along if you would too.

We ended off the week with a bike ride with about, oh, 200 other riders

There’s me in the red.

And a barbecue and party at the end of it, complete with live band 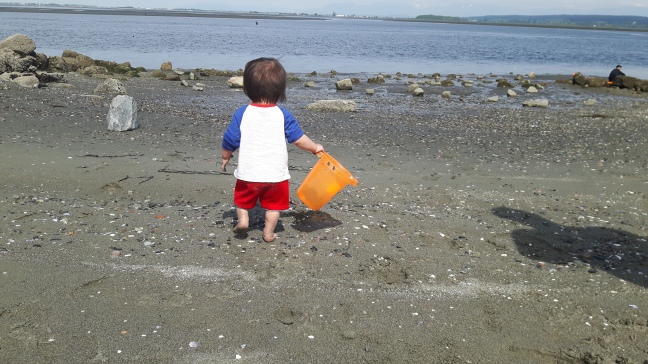 Hi everyone. It’s been a flurry of activity around here lately. My son and his little family (that’s my grandson in the picture above) moved got their own place about 2 weeks ago. For those of you who have been following this Blog, you may remember that they moved here from Edmonton in September last year. You can read about how we transformed our house to make room for them here, here and here.

So that means that hubby got back his Man Cave 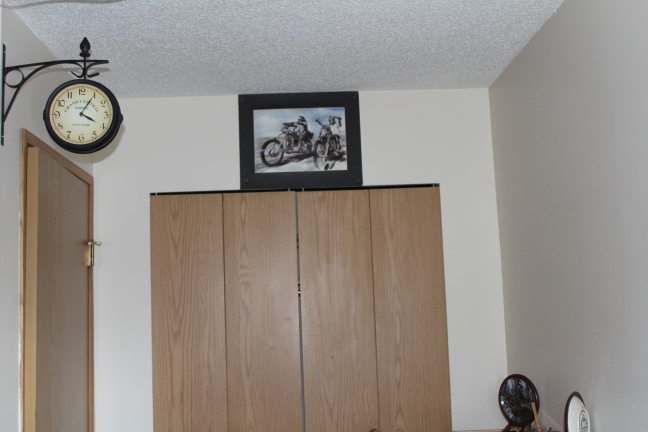 We still need to do some tweaking here.

and I got a new office!

Also need quite a bit of tweaking in this room which will take a few weeks, I suspect.

We gave our bedroom dresser to the kids, so we bought a new one from Ikea, put it together

Our patio set needed a bit of an upgrade (the understatement of the century!) 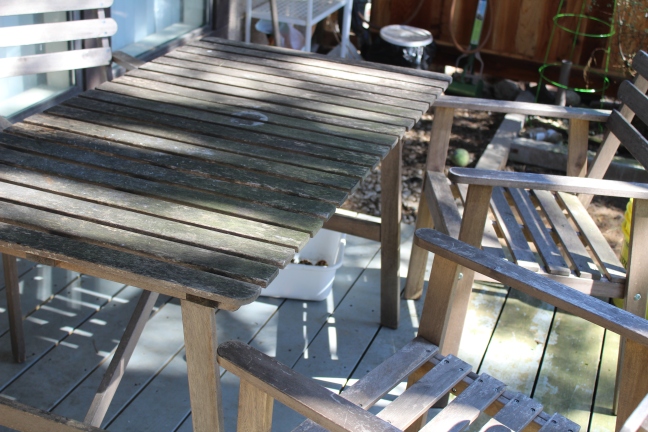 so hubby painted it blue and white. 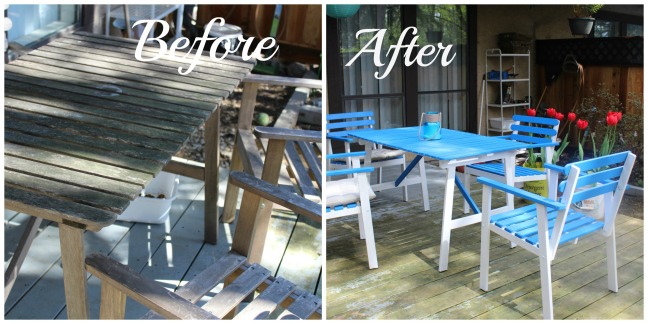 It’s such an amazing transformation, I would never have thought it was the same set! It changes the entire look of the patio.

In the middle of all this, our bulbs started blooming, giving us a splash of colour in our cloudy days (we’ve had unusually rainy weather for this time of the year)

and then the sun finally came out, so we took Neil to the duck park 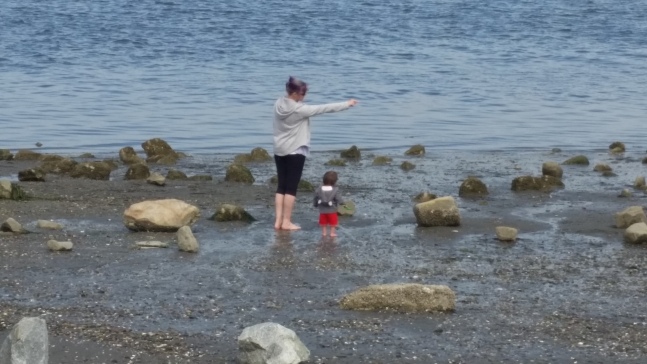 and ended off the week with a couple of drinks with good friends. When I say a ‘couple’ of drinks, I mean a bottle of white wine and a Caesar! That’s two, right? 🙂

Find of the Week!